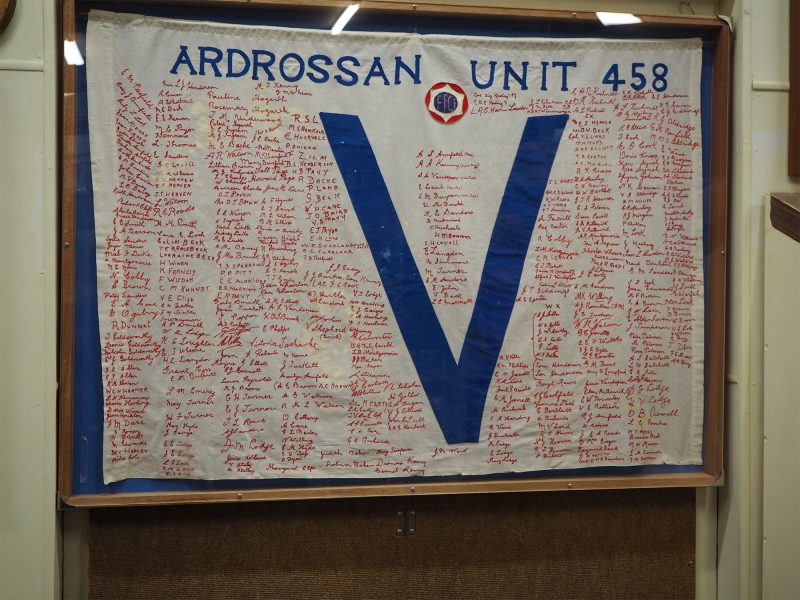 Rectangular white banner with 'Ardrossan Unit 458' embroidered in chain stitch in royal blue cotton thread. The FFCF logo is stitched beneath this text in very fine stem stitch. A large royal blue 'V' (for victory) has been applied in the centre. Names have been embroidered both inside the 'V' and on each side, all worked in stem stitch with red thread. The banner has a dowel through a sleeve at the top and is framed.

World War II. Fighting Forces Comforts Fund. Fundraiser. From museum label: 'Patriotic funds were established in all states during WWI to provide and distribute free comforts to the 'fit' Australian fighting men in all battle zones. During WW2 the fund was called the 'Fighting Forces Comforts Fund SA Inc'. Mainly run by women this is the local banner which was found in the Ardrossan Town Hall several years ago in poor condition. The signatures of those supporting the fund were written in pencil and then embroidered to provide a permanent record. Lovingly restored by a local resident this banner will be on permanent display at the Ardrossan Museum from 1st May 2014 following brief displays in the Ardrossan Library and then the pharmacy'.